If you’re looking for fine, flavorful dining in the Fort Lauderdale area, Mastro’s Ocean Club might be a great option for you. Guests can enjoy sipping high-end wine by the water as you listen to live music; Mastros location is right by the bay, which provides an impressive view.

You’ll likely be impressed by the glass-blown chandelier and temperature-controlled wine wall, and if luxury, high-end steak and seafood, paired with a rich atmosphere are just your taste, you may love Mastro’s. On the other hand, if you are not interested in dropping hundreds of dollars on your dinner, this intracoastal restaurant may not be for you.

What is Mastro’s Ocean Club?

Mastro’s is a premier fine dining steakhouse in the Fort Lauderdale area. This high-end restaurant and cocktail lounge features what some experts have touted as the best steak in the United States, as well as an elegant and classy atmosphere that some say makes its guests feel like royalty. Many have noted the exquisite feel of dining outside near the bay during sunset, and for those who love live music, you’ll want to check out this steakhouse.

It’s worth noting that to visit Mastro’s, you must abide by a strict dress code. Mastro’s does not allow beachwear or athletic wear, as well as hats or excessively revealing clothing.  When you get inside, you’ll understand that the decor simply suggests you keep it classy.

Upon entering, you’ll spot the well appointed lounge and bar area, complete with a fantastic lounge singer.  When I was there, his range went from Michael Jackson’s catalog to a simply incredible rendition of Post Malone’s “Sunflower.”  He was certainly a very talented artist and it was all done in a very silky, lounge-like voice.

As far as my experience, my date and I split the 32 oz. tomahawk steak and it was simply incredible.  For sides, we sampled the asparagus and the mushrooms.  Both were on point.  Since I’ve only been one time, I surveyed the web to see what others thought of the menu at Mastro’s Fort Lauderdale location and here is what I found.

One thing that most diners at Mastro’s agree upon is that the food on Mastros menu is exquisite, from the “28-day wet aged steak” to the shrimp cocktail. You’ll be able to choose from a fine selection of both steak, poultry, seafood, and vegetarian options at Mastro’s; for example, a steak with a red wine reduction is a top choice among many diners at this steakhouse.

One vegetarian option that reviewers have touted is the scalloped potatoes. Many diners note that these potatoes are incredibly creamy and lush, making for a satisfying appetizer or side dish.

Many claim that Mastro’s dessert is to die for, as well– the warm butter cake is frequently mentioned as the number-one dessert option on Mastro’s menu. I can concur that not only is it amazing, but the pumpkin flavored edition that’s out right now for a limited time is one of a kind.  Don’t even think twice about it, just order it and come back and thank me later by leaving a comment.

Some may find that the warm butter cake, among Mastro’s other desserts, is a bit excessive, so it depends on your tastes as well as what you’re in the mood for. For those interested in a gooey, savory treat, you can’t miss this warm butter cake, but if you’re trying to cut back on the sweets, you may want to skip this item on their menu.

Overall: diners at Mastros note that their menu items are delicious and well-prepared, although pricey. Some claim that Mastro’s food is a bit overpriced, while others will say that they received a great value for what they paid .

How Was the Service at Mastro’s?

I’ll go on record that during my visit, the service was A+.  Everything from the pre-meal experience in the bar, to the server, to the bus staff, everyone was on their “A game.”

Looking around the web for Mastro’s reviews I see that people have mentioned they agree with me that the service was exceptional, with hostesses and servers displaying attentive and careful attitudes towards their guests. In fact, many diners at Mastro’s did note that their servers were extremely kind and considerate, and made their dining experience at Mastro’s top-notch.

On the other hand, several people will mention that the service is hit-or-miss. For example, some have noticed that hostesses often fail to ask if a group would like an indoor or an outdoor table. In addition, many parties who visited the restaurant noticed that their server did not check on them at all over the course of their evening, and that they were more frequently visited by other staff members.

In short:  Diners expect top-notch service when paying triple digits for a meal, and in fact, many diners do receive exceptional service at Mastro’s. I certainly did, and I’ll be back very soon. On the other hand, a handful of other diners received service that is to be expected at lower-end chain restaurants– inattentive and relatively unprofessional.  I’ll also note that the Mastro’s reviews citing poor service all seemed to be posted on websites within the restaurants first few months in business, and as someone familiar with the industry, I tend to not view those views as something to think will trend long term.

What is the Atmosphere Like at Mastro’s Ocean Club?

At first glance, Mastro’s atmosphere is ritzy and upscale. Diners who appreciate exquisite items and experiences such as a temperature-controlled wine wall, or a valet service, with particularly love this steakhouse.

Those who  will enjoy this location will be those who love high-end dining. You’ll likely always see a Mercedes or a Bentley, or some other luxury vehicle, parked in front of this steakhouse; in addition, as soon as you walk in, you’ll notice– due to the strict dress code– that everybody in the vicinity is dressed to the nines in luxury fashion. It’s a crisp, ritzy air all around, so if elegance is your game, Mastro’s is for you.

In addition, it’s worth noting that the view here is absolutely exquisite– almost everybody who dines there loves sitting by the bay while sipping a glass of wine. Mastros location by the bay is one point about dining at this amazing restaurant that gets almost exclusively positive remarks!

In conclusion: many will find that they fit right into the upscale atmosphere, and that they get their money’s worth not only due to the peak steak, seafood, and cocktails, but also due to the exquisite, rich atmosphere that the uber successful restaurant provides. On the other hand, though, some may find Mastro’s to be a little too uptight for their taste; again, many reviewers have mentioned that they feel they paid a little too much for what they received.

On this note, I believe that it really depends on what you’re looking for; some people are happy to pay extra for a luxury atmosphere, while others feel that this exchange is not a good value for their money.

There are a few critical reviews of Mastro’s that are worth mentioning briefly. First, as mentioned earlier, some people believe that diners at Mastro’s do not receive a decent value for what they pay. For example, Mastro’s has advertised its 28-day wet aged steak, which some people believe is nothing more than an old steak that has been sitting in the fridge for 28 days.

In addition, some diners have taken issue with the quality of the food at Mastro’s. For example, some reviewers mentioned that their steak arrived at a temperature other than the one that they asked for.

The live music is a notable feature for some diners, but others didn’t appreciate it quite as much. One review particularly highlights the fact that dining inside was nearly impossible while live music was playing, as it was far too loud to enjoy any conversation.  To them, I say call ahead and request an outdoor seat.  The music was never a negative factor for me, I really enjoyed it.

All of the restaurants are owned by Landry’s, Inc.

In conclusion, this is a fine steakhouse in the Fort Lauderdale area, if you love enjoying a shrimp cocktail by the bay, listening to live music, and dining in an air of rich elegance. The food is pricey, but many believe that you get what you pay for.

If you aren’t interested in paying for a ritzy atmosphere, or if a strict dress code feels too uptight for your taste, you may want to skip this venue. Also, if you take issue with live music that’s too loud for conversation, Mastro’s may not be for you.

However, all in all, this is a prime fine dining location in Fort Lauderdale if you’re looking for top-notch steak and seafood, as well as sleek elegance and an upscale atmosphere.

Chris is a Midwest Transplant that has lived in South Florida since 1999. While he likes to remain active and is an avid sports enthusiast, he's become our go-to provider of reviews of any establishment serving food and booze! 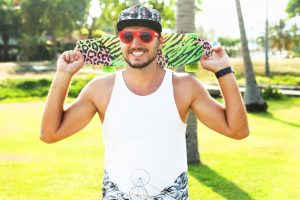 I’m Chris, a Florida resident that enjoys providing people with hot takes on what’s going on in my home State. Follow me on Instagram.